Hello. I use the settings of each pedal separately (left, right). No effect on B206.

We have a fix coming out for this later today!

Could you test out this build, and let us know if it gets your rudder working?

Just impossible to control on the ground!

Barely 1% of collective and the B206 wants to rotate - plenty. Then TRY and counter it you have to go full-on left tail rotor! Then, lift the collective slightly by another 2% or 3% it goes ‘viciously’ the opposite direction.

My gut feeling here is that this model is very much in its infancy with much more to do.

It’s looking like this may actually be a glitch in Easy Mode, we’re looking into it! The required rudder during collective application is much smoother in Realistic mode, so we’ll get this fixed.

Agh thanks - I knew there had to be something not quite right, somewhere!

Hello. update 1.92
Does not working properly

That looks like you have two things assigned to that axis. Check for double bindings on ALL axes!

Been using my single axis pedals today so all was fine but i dont like those pedals for helis so went to try my split axis pedals again now the update is out and it results in exactly the same behaviour as shown in Loatan’s video.

I definitely don’t have anything else assigned to those axis and they work fine in all other planes and helis I tested with.

Thanks all we see what’s going on. We tested these against an XBox controller, but on a true split-axis pedal there’s an interaction we didn’t account for. We’ll get it fixed.

Thanks guys, appreciate it.

I am using the Thrustmaster TPR ‘Pendulum’ rudders/tail rotor axis. 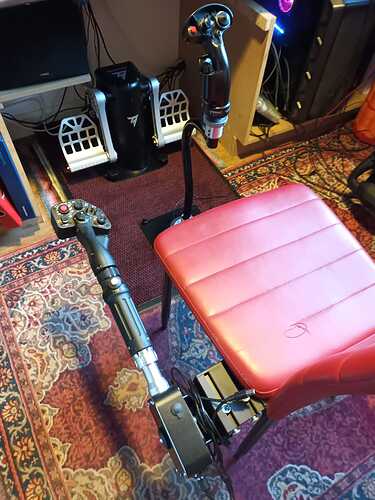 Thanks all we see what’s going on. We tested these against an XBox controller, but on a true split-axis pedal there’s an interaction we didn’t account for. We’ll get it fixed.

Just plugged my separate axis pedals back in to find this still isn’t fixed. Any progress on this issue guys?
They work just fine on everything else including your B-47 .

My understanding after asking another Dev of helis and aircraft for their insight is; that the likely issue is the default MS/Asobo aircraft code which is a part of virtually every aircraft that works in the simulator is possibly missing or only parts have been utilised in the 206.

While different, I use keyboard assignments for the rudder/pedal control, it works in every other default and third-party helicopter and aircraft I have flown to date, but not for the B206. I haven’t flown the B-47 though, it would be interesting

TheMoose - Could you reach out to support@flyinside-fsx.com ? We’ve got a patch for these but would like some extra testing before publishing it.

Email sent! Thanks. Happy to do some testing.

Hi there! I have the same issue as OP - I have my split logitech pedals, works great with the B47 but my rudder inputs seem to have no effect with the B-206. It’s as if the assistance is on and counteracts the rudder input to negate it.

Wanting to see if there’s been an update to this? Have been checking the updates page but the latest version is still 2.06.

Haven’t a clue what the problem is but this is the only Plane/Heli/Car i’ve ever not been able to use these pedals with in 15 years of owning them over multiple flight and racing sims. How hard can it be to assign one axis to one pedal and another axis to the other?