The Flyinside Helimanager doesn’t appear to function with the FSEconomy Simconnect client. I can load one of them but not both.

I’m able to load both, but haven’t been able to complete a flight. It’s giving me a validation error referencing speed.

Same thing happening here to me. The error being thrown by the various FSEconomy clients says something like “VALIDATIONERROR: Zero or negative flight time calculated” To me this must have something to do with the external flight model. It’s not allowing the FSE client to correctly interpret flight time, I believe specifically from takeoff to landing. Tried it with a short and a long flight using both FS9 and FSX clients.

I am really looking forward to adding your 206 to my FSE hangar, I hope this gets worked out! Also by the way, like the HPG 145, if there is a way you can add a “fake” parking brake feature somehow that would be cool too, so the FSE client doesn’t immediately end the flight right when you land somewhere =]

So I have a friend that has the Bell 47, I decided to have him make an FSEconomy account just to try flying the Bell 47 on there for a minute, and it works fine. This kind of kills my theory about it being the external flight model. I have no idea what could be causing the error but am still highly looking forward to a resolution =D

Yes I can confirm that the Bell 47 works ok with the FSE simconnect client. It must be something unique to the 206.

Thanks all. Really interesting info regarding the 47 vs 206. We will make sure to address this.

I’m able to run both apps at the same time, and I can start a flight in FSE just fine, but I can’t get it to end a flight.

I land at my destination and nothing I do triggers the end of flight, even shutting down entirely to cold and dark. Normally in a helicopter you just land and it triggers immediately - it works this way in the bell 47G for example.

Edit: As far as I can tell it’s because the Bell 47 is detected as having its Parking Brake (“P Brake”) On. 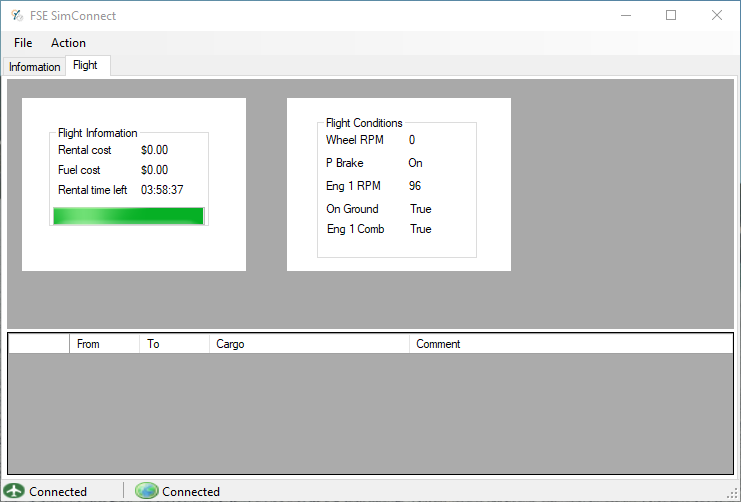 I know. lol. but FSE requires the parking brake to know when to end the flight, so in helicopters it’s usually just set to always-on as far as the game is concerned, then your flight ends when you land.

In the 206, it detects the Parking Brake as “off”, and the parking brake bindings do nothing, so there is no way to tell FSE you’re done.

There’s the same issue with the FSUIPC FSE client which doesn’t use Simconnect but clearly uses similar criteria for detecting the plane has landed and stopped and so isn’t ending the flight.

I was successful once by returning to the main menu after shutting down. I was using the FSUIPC client and it automatically ended the flight for me. The only other thing that I did differently was starting the flight with the engines running on a runway. I haven’t had time to test this option again.

Returning to the main menu with the SimConnect client cancels the flight because “The aircraft was repositioned”.

I wondered if it was a one-off event. Hopefully, there will be a solution soon. I would love to be able to use it in fseconomy.

This is interesting. In my post above I had asked the devs if they could include a way to “turn the parking brake on and off” like HPG did with their helo addons, specifically for FSEconomy users for this reason.

Shutting the engine down should end the flight normally regardless of a parking brake, but it is my belief there is some subtle difference in the flight model FlyInside has for their 206 vs the flight model for their 47. (The external flight model is fantastic and I love it by the way) I believe that FSE is not able to recognize in a traditional MSFS sense what the engine is doing, whether it is running or not. The reason having the “parking brake” is important is because this way, we can land somewhere with the “parking brake released”, then “set it”, this will end the flight in the FSE client (simulating dropping off your passengers or cargo), then we can start a new one and takeoff without having to shut down the engine. We in effect have the option of if we want to shut down the engine or not when we land. This is the way it should be, ideally.

An ideal configuration here would be that we can “turn the parking brake on and off” and that the client could see proper passage of FLIGHT time (i.e. time airborne in particular) AND for the FSE clients to be able to see whether the engine is running or not, in order for either FSE client to be happy.

I have been patiently watching and waiting to hear more about this issue, which seems to have now turned into even more of an issue, so it is nice to see some more people chiming in on the topic!

I’ll repoint this to Dan as soon as he’s about in his office again guys.

I have been having this issue too! I tested with both the simconnect client and FSUIPC client and neither worked. It is such a shame because I would love to use the heli in FSE but this weird issue is stopping us.